Mornings are the worst for me lately. Today I asked God to give me strength. I have to be able to keep going, I have to be brave and strong. It’s just a moment, slowly it gets easier and I get it together. I got out of bed and kept on.

A rounded tit looked at me from the mirror. Voluptuous, like a ripe, tropical fruit, painted in a gradient of purples, greens, and yellows. I told Samirah my tit looks like a tropical fruit because of the bruise, she says it looks like a mango. I don’t think so, it looks a little more exotic.

It’s weird, but in the last few days, I’ve noticed how beautiful my breasts are. I never thought about them that way. My tits are slightly separated and, in the summer, they tend to separate even more. It must be the heat. One time my grandmother saw them and told me “You have the same Puchecas as your grandma”. Puchecas is the slang name for boobs in Colombia. I didn’t take it as a compliment. I have never admired my tits much. I remember being very young on the bus, suffering from the potholes in the road. My size is 95C.

I took a shower because it helps. Samirah went to walk the dog and little by little, the day got better. I swept the terrace, watered my plants, cut a corn that was growing between my little toe and the toe that follows on the left foot. I drank coffee, a lot of coffee. And so, the joy of living came over me. I edited the first chapters of “Journal of a tit” while I kept an eye on the robot vacuum so it doesn’t swallow the pieces of Samirah’s puzzle, which has hijacked half the floor of our living room. This is how she found me when she returned with the dog.

Otto has been bad. He had gotten into a fight with a smaller dog.

We ignored him for a few hours. The day slipped away doing silly tasks. She went to the supermarket and I called a friend and told her, while I was hanging the laundry and making more coffee.

It’s funny that the first time I tell someone that I have breast cancer, they don’t seem to register it. The first time I noticed it, it was striking, hurtful. I thought the person I told, didn’t give a shit. It was a colleague of mine. The next day, she acted completely different, as if it had taken her 24 hours to understand what I had told her the day before. The same thing happened to me with another colleague, with my best friend and today also with this good friend. People don’t show an emotion that seems to match with what is happening. Something very bad is happening, and the person I am telling seems to take it as if I am talking about the weather. Most people, though, don’t know what to say. But for me, it’s good exercise, because I think I’m the same way. I’m not sure I’ve taken it all in. So I think the more I say it, the faster I’m going to believe and accept it. Samirah has also told me that one of these mornings while looking at herself in the mirror, she had to remind herself that this thing we are living is real and that it is better to accept it as soon as possible.

Today we had pitas for lunch. My wife has prepared a yogurt, cucumber, and garlic sauce. I have not stopped burping garlic all day long. After lunch, we talked to her parents. They knew about the lump in the chest and the biopsy, but they didn’t know the results yet. The news was hard for them, they are sad. Samirah was delaying talking to her parents a bit. It’s a conversation you don’t want to have with the people you care most about. I understand it because I still have to talk to my sister and my father and just the thought fills me with sadness. But we are asking everyone to be strong and positive. It’s important to me, it’s important to Samirah. All of us must stay positive.

The afternoon went away, I took a nap and Samirah watched TV. Then we watched an animated film together. Samirah doesn’t like drama movies, which are my favorite. She prefers horror films, comedies, or action films. She likes animated films too, but I never want to see them. We are so different!

Around ten o’clock at night my aunt called me. She asked if Dylan has called me. I told her no and put myself on guard. Now what? My aunt told me that the service that can extract my eggs is currently not available because of the Coronavirus. If I start chemo without the eggs being taken out and then frozen, they will be ruined. It is unknown when this service will work again. She also told me that with my genes which seem not to be the best, who wants to have children? She said this in a more subtle and a sweeter tone, of course. I told her that I am going to discuss it with Samirah, but I don’t think we’ll delay the treatment.

Samirah always has told me that, if we have children – she is not sure she wants them – she would want them to look like me or like her. She says that having a black or Asian child, and being two lesbian mothers, we can only guarantee a future of bullying for our child. I take it as a joke, but I don’t know how serious she really is. I don’t think the same way. I think that if tomorrow someone abandons a child on our terrace, I’m going to love him or her as much as if I had given birth to him or her. But in the current situation, we agree. I am of no use to a child if I am dead. I have lived it. My mother died in an accident when I was seven years old. My sister and I haven’t had it easy. We are not going to delay the treatment. 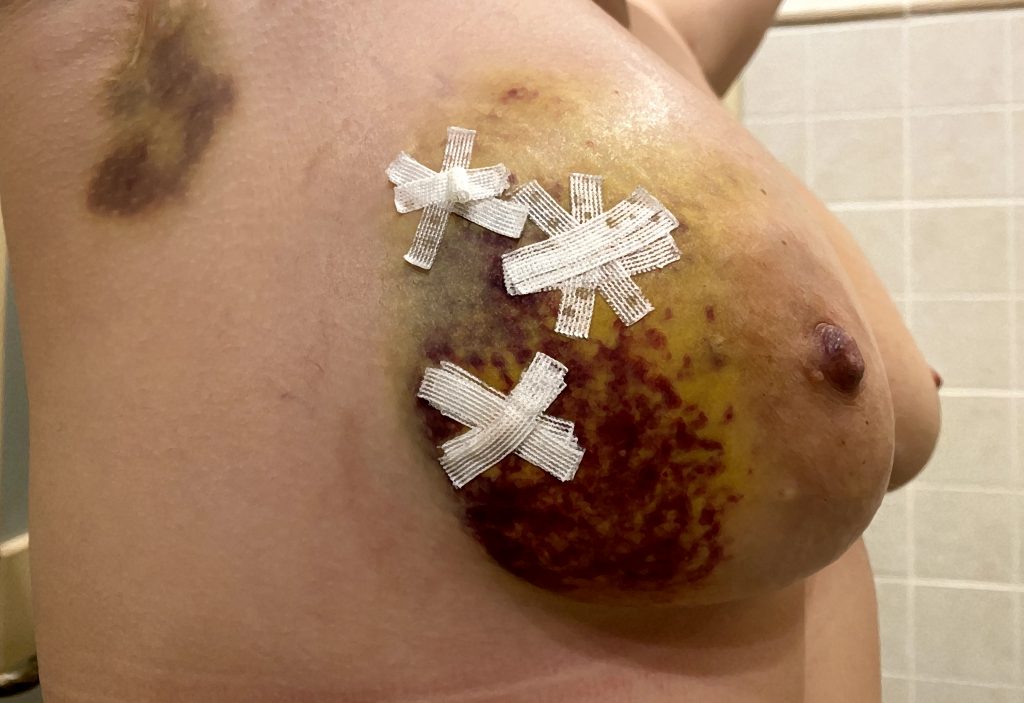 Receive the next chapter in your email